Come Visit the Most Popular City in the United States, New York City

Most people that visit the United States, either for business or because there are so many beautiful cities spread all across the country where you and your family can have memorable experiences. There are the classic East Coast cities that formed the original 13 colonies that made up the first version of the United States. These cities include Philadelphia, Boston, and New York and are still wonderful places to visit today.  The East Coast is the cultural, financial and business capital of the United States and it is also is home to the nation’s capital Washington DC, which is where the President and Congress reside.

East Coast cities each have their own character but share in many traditions. They each have beautiful traditional American architecture that dates back centuries and can still be viewed. They also have many cultural landmarks including statues, monuments art houses and museums that pay homage to America’s past.

Out of all the cities on the East Coast, there is one that most people single out as being ideal to visit because of its many attributes and attractions. It is the most visited city in the country, New York:

New York city consists of five boroughs, four Manhattan, Brooklyn, Queens and Staten Island, that are spread across three islands, and one the Bronx which is on the continental US. When most people speak about visiting New York City, they are talking about going to Manhattan because it is where most of the city’s hottest activities take place.

Manhattan sits on an island in the heart of New York City, and in the heart of Manhattan sits the most popular park in the world, Central Park which is an 843 acre plot of green that is filled with activities and people all year round. The park contains an Alice in Wonderland sculpture, the Belvedere Castle atop Vista Rock, and perhaps it’s most famous location, Bow Bridge. Right in the center of the park sits a beautiful lake called Conservatory Water. And next to it, the Conservatory Greenhouse.  There are trails running everywhere through the park that are perfect for walking or bike riding and activities including concerts and talks happening one many days of the week. Central Park is a must see attraction when you visit New York. 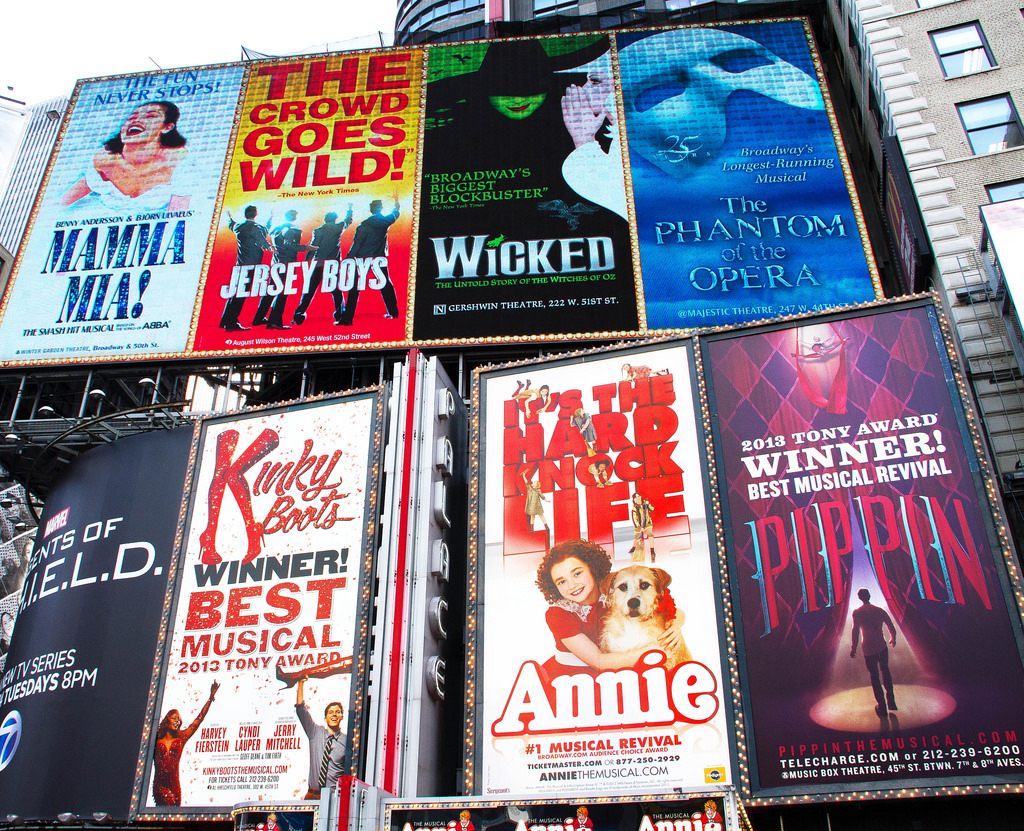 At the center of New York’s art scene is the world famous theater district, Broadway. The district consists of dozens of historic live venues that present musicals, dramas and comedies by the past and current theater masters. Thousands line up in Broadway every day to buy tickets to these nightly shows. Each is held in a theater that seat 500+ patrons who pay top dollar to be one of the lucky to attend these usually sold-out shows. If you want to go to Broadway, buy your tickets early or you will surely be disappointed.

The most iconic statues in the US and perhaps the world resides in New York City. The Statue of Liberty was a gift of friendship from the people of France to the United States 150 years ago. It has stood as more than just a monument however, it has represented freedom to millions of lost and forlorn people on every corner of the planet. It sits in Hudson Bay and once was the transfer point for immigrants coming from Europe and seeking citizenship in the US. The statue would light the way for travelers as they entered New York Harbor. Today it is a monument of what the US represents to so many. And still people come to see it and visit the museum now on its island.

Getting to New York is easy and getting around via Uber from the airport and in the city is also easy. There are three major airports that service the city hosting direct flights from nearly anywhere. You must however have a visa to enter the country firth though, which is a process that requires time and persistence. If you are a citizen of the 38 countries with whom the US does not require a formal visa, you still must acquire an ESTA Visa that you can acquire online. This process can be quick an easy but must be gone through by anyone seeking entry into the country.